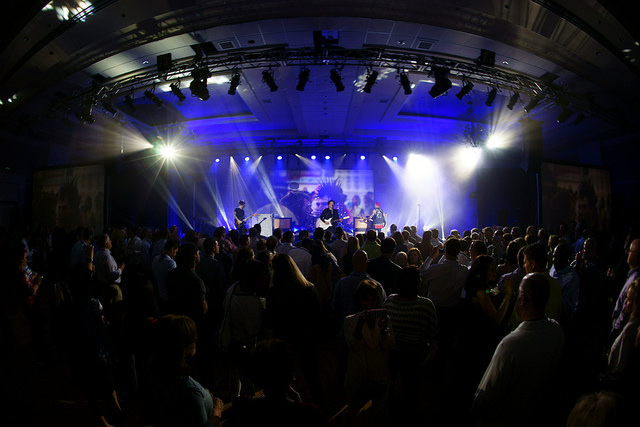 The other day I was pursuing one of the many online sound groups and came across a question from someone who I believe to be a volunteer sound tech at a church. He was asking if sound was subjective. He had been dealing with various other leaders in the church and was struggling to come up with a consensus on whether there was “good” sound or if it’s all in the ear of the beholder.

As someone who has been party to many of these discussions, I’m going to throw my thoughts out here about this topic. The more I’ve thought about it over the weekend, the more I want to break it up into two or three posts—we’ll see how it goes. Because I think we have a few things going on here.

First I want to tackle the idea of PA tuning, because without a well-tuned PA, good sound is much harder to achieve. And, as you might expect, there are plenty of opinions on how to tune a PA. Second, I want to dig into the difference between “subjective sound” and “personal preference” when it comes to mixing. I think those concepts are often confused, and when we assert one as “correct,” we get into trouble. We’ll see where we go from there.

You Can Tune A Piano, But You Can’t Tune A Fish

That’s probably one of my favorite album titles of all time (thanks, REO Speedwagon!). When it comes to PA tuning, you could ask 10 guys how to do it and get 11 answers. But it basically boils down to two main schools of thought. The first says the PA should be as linear as possible; that is, what comes out of the board comes out of the PA. When you look at a transfer function graph of a PA tuned like this, it should be pretty close to flat across the audio spectrum.

Before we go any further, I want to stop and say that in an actual, live room, you’ll never get it totally flat. There will always be slight anomalies, but these should be fairly small. And if you do manage to get it totally flat, you can completely change that by moving the mic about 3 feet. So when I say a linear system is “flat,” I don’t mean the trace looks like it was drawn with a ruler. I mean it’s generally flat.

The other school of thought is to build in some tonal shaping into the tune of the PA. This would normally include what some call the “bass haystack,” a 6-12 dB bump at the low end that looks somewhat like a haystack, and usually also includes some rolloff of the high frequencies. How much roll off and where it starts will vary, but it’s usually in the order of 1-2 dB per octave above 1-4 KHZ.

I’m sure there are those out there who will argue to the death about which method is correct (or have their own, far superior method). Because this is that important. [That was sarcasm] As is often the case, much of this is personal preference. I’ve heard and mixed on systems tuned both ways and to me and my ears I prefer the latter approach. I find these systems sound more musical and less harsh. However, good friends of mine will argue that mixing on a system tuned the way I like it is like mixing with blankets over the speakers. I can appreciate that. Their approach to mixing is different from mine and while we achieve similar results, we go about it differently. I think it’s possible to get a great sounding mix on either tune, but you have to approach the mix differently.

I do believe folks in either camp will agree that the overall tune of the speakers should be accurate. Aside from a bass haystack (or not), and a subtle, linear roll off of the HF (or not), the system should pretty much deliver what comes out of the console. So while we may have be able to build consensus on a couple of different ways that are “correct” to tune a PA, there are a lot of ways to really screw it up.

You Can’t Tune What Wasn’t Designed To Be Tuned

Part of the problem stems from too many badly designed (or not at all designed) and engineered systems that simply cannot be tuned. What kind of system would this be? I’ve seen seating areas fully covered by 2-3 speakers that are at radically different distances from the seats. You can’t fix the comb filtering that will ensue with electronics. I’ve seen systems that use speakers that are entirely wrong for the space. Sure, they make sound, but it’s so uncontrolled there’s no way to make it sound good. Other times, entire seating sections are off-axis of the PA, and there’s no electronic fix for that. Those are all bad.

I’ve also seen all sorts of crazy frequency response traces from systems I’ve been called in to fix. These are usually the result of someone with just enough knowledge to be dangerous going in and playing with all those cool EQ controls inside the DSP. I’ve also seen some, uh, interesting EQ curves on 31-bands on the master bus of consoles. Cleaning all that up makes a huge difference.

While I think there is some room for preference and individual taste when it comes to tuning a PA, if you put 10 top notch sound guys in a room with a competent system tech, you could come up with a general consensus of what sounds good and would be easy to mix on. And it would be relatively easy to spot ways not to do it.

This post is part one of a three part series originally posted on ChurchTechArts. To read parts two and three, click below: