Home » Uncategorized » Do a Good Job 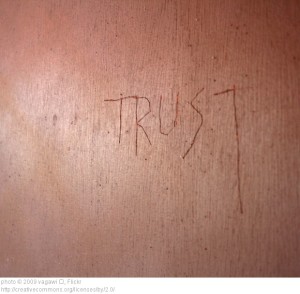 A while back, I was on a panel at a conference, and we were taking questions from the audience. We had quite a few good ones, but this question has stuck with me (and this is a paraphrase of what I remember…the exact question isn’t as important as the thought behind it).

“How do you re-build trust with leadership after it’s been broken? Right now, the audio team is missing cues every week, mics aren’t on, and the mix doesn’t sound that good. How do get leadership to support the tech team?”

Dave Hatmaker from Yamaha answered quickly and succinctly, “Do a good job!”

I could probably end the post there, but I won’t because it sounds a bit harsh. However, it’s more like speaking the truth in love.

I went so far as to say, “If you are running audio and can’t get the pastor’s fader up when it’s supposed to be, you should probably find a new place to serve. That’s as easy as it gets.” Again, it sounds harsh, but it’s true. Week after week, if the pastor’s mic isn’t on when he starts talking, how much trust does he have when you come asking for money?

If you want to earn the respect of your leadership, do a good job. It’s really that simple.

One of the traps we can fall into as techs (both volunteer and paid), is thinking that if we just had better, newer, shinier, different or digital gear, well, then…then we could do a good job. We blame the cameras, the mixers, the speakers, the room, the lights, the lighting board, even the volunteers and tell our leaders if they would just give us more money, then we could do a good job.

But it doesn’t work that way. After you do a good job, then you get more money to buy better equipment. After you wring all the performance you can get out of your system, hitting every cue along the way, making it do more than it was ever designed for, then you get to talk about asking for more.

I’ve talked about this before, but it bears repeating; it’s not about the equipment, it’s how you use it. And before you jump to the conclusion that because I’m at a big church in Southern California and have all kinds of great equipment so I don’t really know what it’s like, you need to remember a few things.

First, I’ve been at many a small church where the console of choice was a Mackie SR32, and the worship leader’s mic was a PG58 (yes a PG, not even an SM!). Even at my current church, we limped along with a camera that Sony stopped carrying parts for in 1998! My newest moving light is 10 years old, and 80% of my audience seating area is off-axis of the PA (long story…it was there when I arrived). When I arrived, we had 72 channels of dimming—and 42 of them worked, sometimes. I’ve worked really, really hard to do a good job in spite of all that. And I’ve received a lot of funding to upgrade stuff as a result.

I’ll give you a quick example using our video team. For years (even before I arrived), tech asked for a new switcher, and it was turned down every year. We desperately needed a new camera, but again, it kept getting cut from the budget. And to be honest, the video team was discouraged, and not doing great work.

About a year ago, we decided to stop blaming things on the equipment. I told our teams, “Yes, camera 2 sucks. Yes, the switcher sucks. Yes, the composite video image we’re feeding the projectors sucks. But let’s pretend it doesn’t and really step it up. Let’s act like we have better equipment than we do. Then let’s see what happens.”

A year later, we had a new camera and after we pulled in some new cable, we installed a new switcher. Now, I had to get creative with the budget to make that happen, but no one fought me on it because we were doing a good job with what we had. After the upgrade, people were be blown away with the improvement in picture quality. But it was the performance of the team in spite of the equipment that made it possible.

And to be clear, I’m not talking about the occasional mistake. We all make them. I missed a cue last week. I was bummed, but I’m human. Still, everyone on my team works really hard to keep the mistake count to the low single digits per quarter.

I’ll say it again, it’s not about the gear. It’s about doing a great job with—or even in spite of—the gear you have.

How have you stepped up your game, overcome equipment limitations and built trust with your leadership?